When all else fails, hands-up! 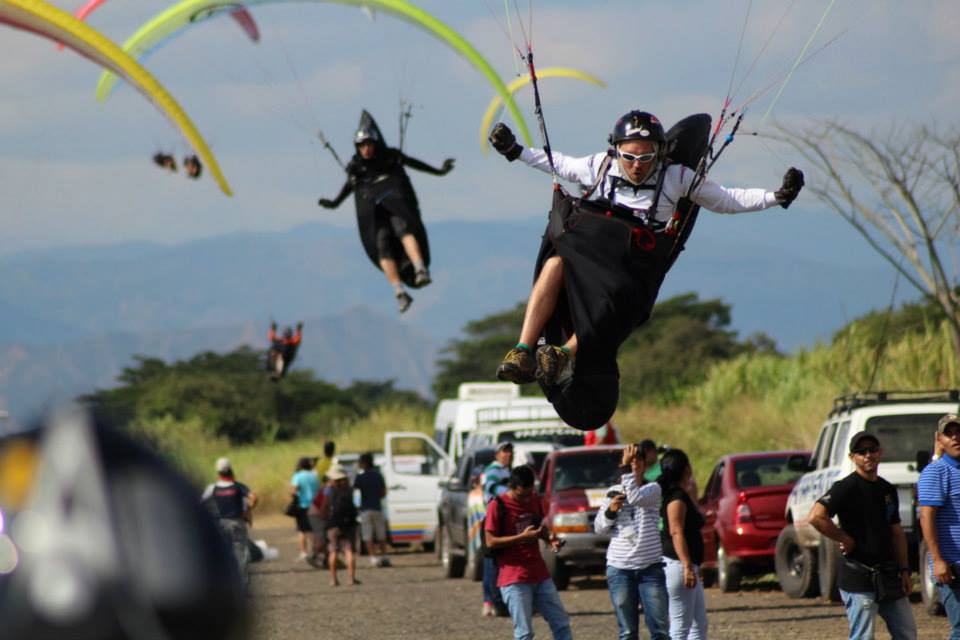 Not really a landing field.  I was surrounded by 3metre high sweetcorn “trees”.  Remarkably I’d landed on my feet, but looking at my wing draped limply high above me in the sweetcorn canopy, I had to admit, it wasn’t an entirely pretty landing.  I looked past my wing, just above.  A procession of wings were eking out a cunning glide into the next field, a field without sweetcorn, a field of cheering spectators, refreshments, handshakes, high fives..

Trapped in the sweaty Colombian undergrowth I brushed some bits of leaf from my face and pondered my misfortune.  One more turn in that last thermal?  Half a turn? A slightly less aggressive final glide?  Even a dose of luck!?  Some small brutal unforgiving difference separated me from glory….AGAIN!! For the second time in as many days I’d missed goal by mere metres.  After 3hours and 80kilometres of high adrenaline maxed-out racing, yet again I’d come so very close.  The scoring system is punishing.  Make “End of Speed” with a decent time but fail to cross the goal line and “Bam!” you lose as many as 80 places on the day and at this level more than half your points.  You might as well have bombed out hours ago. Doing that two days in a row is a sure way to see your overall position drop down the page, off the page, maybe skip another page and land you somewhere in obscurity.

Absorbed in my misfortune, I failed to hear the rustling of leaves.  Suddenly there they were, two of them, bedraggled weather-worn and definitely not smiling.  Landing-out on someone else’s property can go one of two ways.  So far I’d collected mainly the good stories, you know the ones where you’re invited in for a sumptuous dinner, “drink my wine”, “marry my daughter”, that kind of thing.  This one wasn’t one of those.  Both men looked menacing.  Maybe I’d have to part with some pesos?  But then I noticed the sawn-off shot guns.  I began to think that maybe I didn’t have enough pesos.  “If in doubt, put your hands up!” This was one of those occasions.  Suddenly, not making goal seemed like the least of my problems.

Racing paragliders is a wonderful drug.  For many years I’d been content with racing sports-class wings.  Last year I stepped up to race with the big boys, doing enough in the World Cup Series to be selected for the British Team.  To represent my country in the sport that I love at the very top level was an honour indeed, but here I was in at the deep end.

At the start of each task at a competition of this level you might expect every pilot to be vying for the same morsels of lift, but here the pilots really do fly with their elbows out!  And the inevitable start ruck doesn’t end after the start.  Gaggles march across the Colombian skies in close combat for hours on end.  There’s no let up.  Indeed it was not uncommon to see 50 pilots crossing the finish line within seconds of each other.  Welcome to the “super-gaggle”.  I personally witnessed two head-on collisions.  Whilst on one occasion the gliders miraculously separated, on another, reserves became the only option.  There was much brushing of wing tips, ruffling of feathers and quite a lot of shouting in different languages.  Is this acceptable?  Shush! Fly! Breathe. Climb. Climb faster. Mash bar. Glide better. Climb. Mash bar. Climb. Mash bar.  Hour after hour, day after day we fought the good fight.  For two full weeks Colombia did not disappoint: it was flyable almost every day.  It could even tease you with the prospect of a rest day by raining all morning only to open up and present you with another 100kilometre combat opportunity.

Jostling for position, riding fountains of lift, tweaking a glide, eyes peeled for any advantage, Russel’s words rung in my ears.  Russell Ogden is a hugely experienced competition pilot, possibly the best British Competition pilot of all time (and we’ve had some very good ones!).  Whilst not in Colombia he watched and kindly coached the British Team from afar:  “ Fly aggressive and disciplined” “Let others show you the lines” “Roll with the gaggle” “Do not let the leaders get away from you” “If you’re looking at the scenery have a word with yourself!”  Russell, I promise; I didn’t look at the scenery.  Somehow I averted my eyes.  I averted my eyes from the magnificent Andes Mountains.  I averted my eyes from the tropical coffee plantations, the banana trees, the papaya groves, and the sweeping sugar cane fields.  I even avoided looking at the sweetcorn until the very last moment.

But here I was, deep in more than just sweetcorn. They had guns!  “What do I do now Russell?”  Guy Andersen had been telling us something about ninja powers all week.  Now seemed like the perfect time to deploy ninja powers.  I only wish I’d been listening more attentively.  The unkempt pair of Colombians didn’t hesitate.  They marched straight at me and proceeded to start ripping my glider from the sweetcorn.  Delicate they weren’t, but I was too relieved to complain.  Who cares if a line needs replacing? Perhaps they really were here to help!  Eventually, I plucked up the courage to ask what the guns were for.  My Spanish isn’t up to much, but apparently the guns were to protect the sweetcorn.  Lucky for me, my aerial attack on their sweetcorn didn’t seem to count.  I crawled from the field into bright tropical sunshine. I packed my wing on a grass verge within ear shot of the celebrating goal pilots.  I still had so much to learn.  As I fished out bits of foliage from my wing I was feeling hot, but a little less bothered.  Perhaps in the great scheme of things everything had turned out fine.  I hadn’t been shot!  By tomorrow I’d probably even be ready to do it all again.

One more day of racing followed.  I didn’t make goal, but nobody did.  After 90km it all shaded out. We all landed and anyway it was all over.  10 tasks!  At the party that night I caught up with Honorin Hamare, the overall winner.  Honorin is a 23 years old French man and has been flying since he was 11 (that’s gotta help)!  It was also his first World Championships!  I asked him what he thought about the two week competition.  His first comments were about the Colombians; how friendly they were!  I had to agree.  Most of them smile all the time.  As it turns out I’ve got no complaints about the gun-wielding non-smiley ones either!

Now it’s all over, I find myself wondering if I’d do it all again?  Racing is a powerful drug.  Yes I’d love to.  How about Colombia?  Well, I’d definitely go back there!  Next time though I want to fly it slowly, perhaps look at the view, soak up the scenery and even follow that old XC adage, something about always having a landing field within reach.

Thank you to the rest of my team including British Team Manager Kitt Rudd.  We had a blast. We would all have loved to have done better, but perhaps that’s true of everyone except Honorin?  We fought a good fight and held our heads high.  Thank you Colombia!

The FAI World Championships is held every two years.  This year Germany piped Slovenia and Spain to win overall best nation.  Out of the 38 countries represented, Great Britain secured a respectable 10th place.